The Perfect Blog For Crypto Tourists

DISCLAIMER: The recent exploit did not affect trading on Kanga exchange, which continues to operate normally.

As you know, unfortunately today 23th November at 16:00 CET around, during the $TRYV PancakeSwap listing, Tryvium has suffered a hack.

This is an Official Statement where the team is going to explain what happened in detail, during the failed PancakeSwap listing process.

The Tryvium Pancakeswap listing was scheduled to be on the 23rd of November 2022, at 16:00 CET. It was planned by the team a month before the listing date and it involved the creation of a Liquidity Pool (from now on LP).

The community would have benefit from the listing with the creation of a new market on which perform trades, along with the existing one on Kanga Exchange (from now on Kanga)

To prepare for the launch, a smart contract was deployed to act as a proxy between the Tryvium deployer wallet at the address 0x8b48Af3a5B965F94dE7d1870bf2194c2798e4183 (from now on Tryvium Deployer or simply Deployer)
The proxy contract (from now on Proxy) was programmed with the features of the addLiquidity feature, plus an additional anti-bot system which should have prevented the sniper to snipe the bots buys and sells, favoring a clean and stable market which would have grown organically through the time.

At this point the LP was ready to be deployed at the specified time, which should have been approximately at Nov-23-2022 03:00:00 PM +UTC

Unfortunately the hacker got us here and exploited the contract.

The exploit and the hack of the Proxy contract

The hacker, owning the address 0x31dae3b4015e244d3acbf8f3ef05efec0fd51f0b, sent a transaction with the exploit at the proxy contract.

At this point the hacker owned Tryvium deployer LP Tokens and sent a new transaction to remove the liquidity.

At this point the Hacker Address 2 has approximately 86.83 BNB

After this point the hacker Address 2 started sending the BNB to Tornado Cash contract, de facto washing away the BUSD liquidity.
Everything can bee seen at https://bscscan.com/address/0x0bd1ffbc5aee98194b093cbe631c270a3002d523 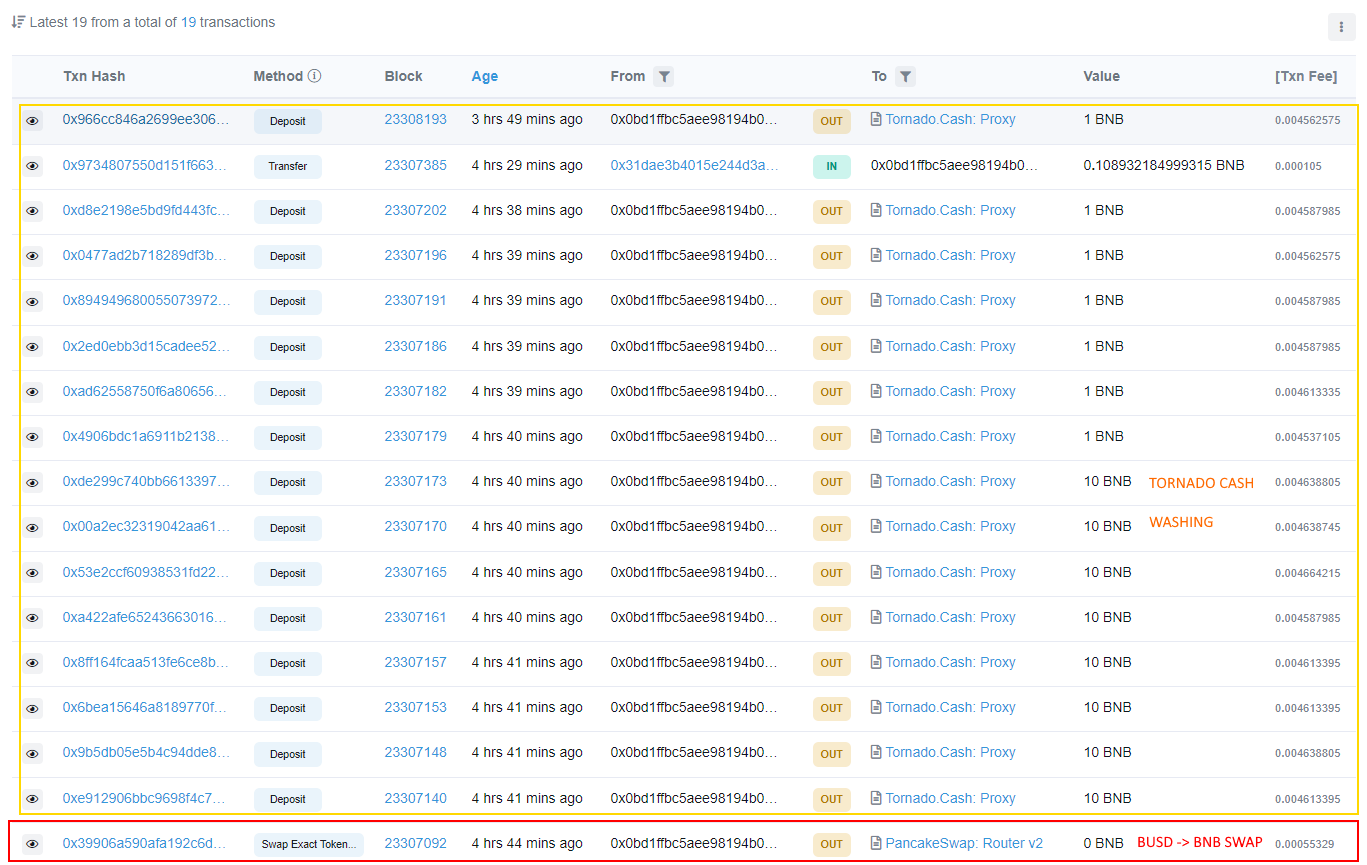 At this point the BUSD of the LP are considered lost, so we reached binance support to ask them to blacklist the hacker addresses.

What did the Tryvium team do to solve / mitigate the exploit?

Due to this, the Tryvium team acted immediately, realizing that LP ownership was lost.

The new LP provided was 5000 BUSD and the equivalent in TRYV tokens, at an average price of 0.006 BUSD/TRYV approximate on pancakeswap.

This gave the team more time to investigate while keeping stable the token condition.

Now more than ever, we need you close to overcome this bad event that has hurted us unexpectedly.

First, we have decided to offer bounties for all the white hackers who can help us to investigate deeply about the PancakeSwap hack.

We’d like to emphasize that Tryvium wants to get out stronger than before continuing with development and marketing that until now havv been really successful and brought the project to the brilliant point to which we are now.

We’d appreciate it if you could contribute to help us using our booking platform tryvium.io, making a reservation for your next trip with Tryvium.

It would be really appreciated and helpful.

We will keep you updated about every next step.

We would like to remind our community that the exploit did not affect trading on Kanga, which continues to operate normally.

Thanks for your patience and support.

Tryvium, your next travel partner: host and travel with Crypto.

Tryvium is a modern booking platform that incorporates the use of blockchain and smart contracts.We deliver real-world solutions to the challenges and the problems of the travel industry.

These widgets are displayed because you haven't added any widgets of your own yet. You can do so at Appearance > Widgets in the WordPress settings.